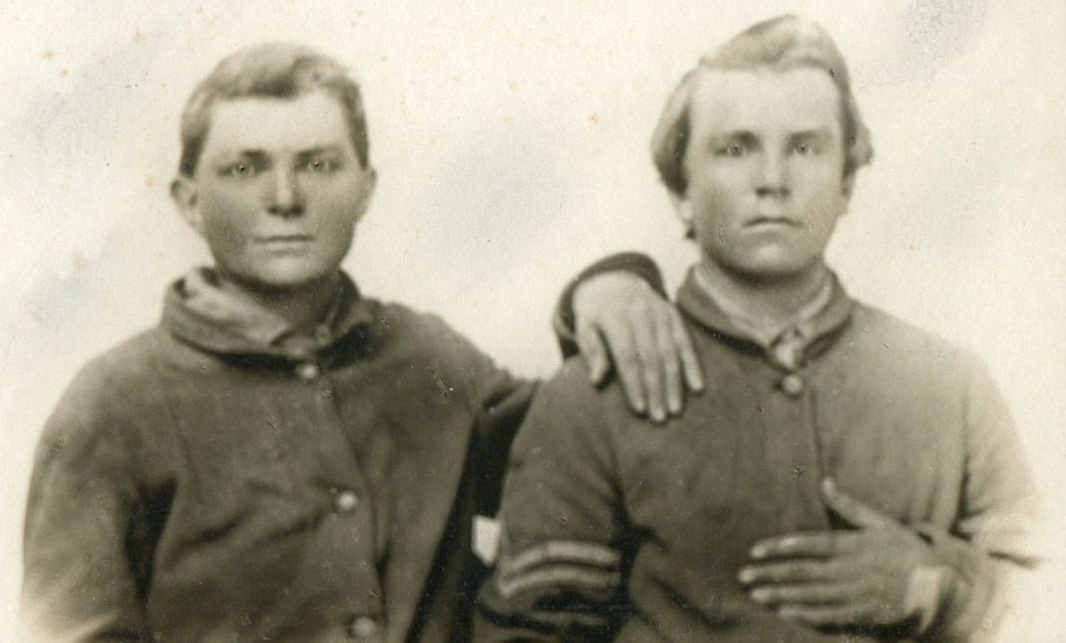 Sebastian Buehler (right) and a brother (left). Unknown whether this brother is Jacob (father of ten and an Odebolt resident) or brother John, who died in the Civil War. 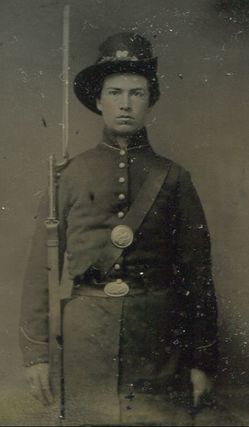 ​Although Sebastian Buehler has been called to another field of action beyond this vale of shadows, yet his memory is fresh in the minds of his many friends of Sac county, who were the recipients of his pleasant greetings and valued friendship during his life time.  He was one of the large number of Germans who have come to this county and been important factors in developing the county and bringing it to its present prosperous condition.  He believed in lending whatever aid he could in pushing forward the cause of civilization and at his death the county lost a man who never shirked his duty as a citizen of the commonwealth.  Additional honor is due him because of the fact that he served in that long and bloody struggle which was necessary in order that the Stars and Stripes should float from the Great Lakes to the Gulf.  Although he was a mere lad of sixteen when he enlisted, he served throughout the whole four years of the war, and the exposure to which he was subjected during that struggle left him in such physical condition that he was never in good health again.

Sebastian Buehler, the son of Jacob and Mary Katherine Buehler, was born in Wurtemberg, Germany, March 30, 1845.  He came with his parents to America when he was ten years of age and settled in Lake County, Indiana.  His parents were still living here in 1861 and, although he was a mere lad of sixteen, he proffered his services for the support of his adopted country and enlisted in the Twenty-fourth Regiment Indiana Volunteer Infantry on September 28, 1861, being mustered in at Indianapolis, Indiana, on October 22, 1862, as a private in the Twenty-fourth Cavalry under the leadership of Capt. J. A. Sims.  His battery was assigned to the First Brigade of the Twenty-third Corps, and was attached to the Army of the Ohio.  He was taken sick near Glasgow, Kentucky, on March of the next year and was in the hospital for twenty-nine days, and was then removed to Louisville, Kentucky, and placed in Hospital No. 7 for thirty-four days, after which he was taken to Indiana and placed in the hospital and upon his recovery was transferred to the Invalid Corps and sent to Washington, D.C., for detailed duty.  He served at Washington until May, 1864, when his company was transferred to Company K, Twelfth Regiment of Veteran Reserve Corps, and served with this corps until his discharge July 27, 1865. 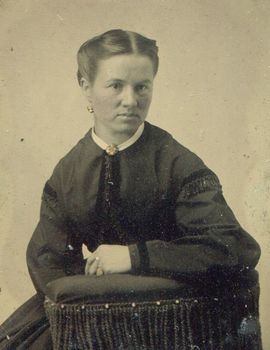 Mary Obrecht
Mr. Buehler returned to his home at the close of the war, a veteran in service, but a youth of twenty years, who had actually spent his boyhood days serving his country.  Sebastian Buehler was married in Chicago [or Indiana] on March 17, 1869, to Mary Obrecht, who was born August 8, 1845, in New York state.  Her parents, Jacob and Louisa Obrecht, were natives of Alsace-Loraine.  Germany, who came to America in the early forties.  In 1852 the Obrecht family moved to Lake County, Indiana, where the mother died, and in 1872 her father moved to Sac County, Iowa, where his death occurred.

In July, 1871, Sebastian Buehler and his wife arrived in Sac county, Iowa, and bought two hundred acres of land in Richland township, at four dollars an acre.  Mr. Buehler's brother-in-law, O. Rudolph, accompanied him, and the two were the first settlers in Richland township.  Mr. Rudolph was later caught in a blizzard in Ida County, Iowa, and some years later died in Indiana, as a result of the terrific exposure to which he had been subjected in the storm.  Although Mr. Buehler was not in good health, due to his exposure during the Civil War, yet he prospered and from time to time added to his land holdings until at the time of his death he was the owner of three hundred and twenty acres of well improved land in this township, and there is now a total of four hundred acres in the estate.

Mr. Buehler was a stanch adherent of the Republican party, and served his party in an official capacity for many years, filling the office of township trustee for nine years, also serving on the school board of his township, and in these important positions he rendered faithful and efficient service to all of the citizens of the township, always taking an active interest in every measure which he thought would benefit his township and community.  He was a stockholder and director of the Farmers Creamery Company of his township, an institution which has been of great benefit to the farmers of this locality.  He was a valued member of the Grand Army of the Republic post and took much pleasure in attending its meetings.  His religious affiliations
were with the Methodist Episcopal church, to which he rendered faithful and loyal service during his life.  Up to the time of his death, on March 12, 1899, he took a prominent part in all enterprises which had for their
object the welfare of the community and was never found wanting in those qualities which characterize the public-spirited citizen.  His life was such that it reflects honor upon himself and he left a name which will be revered by his children in the years to come. 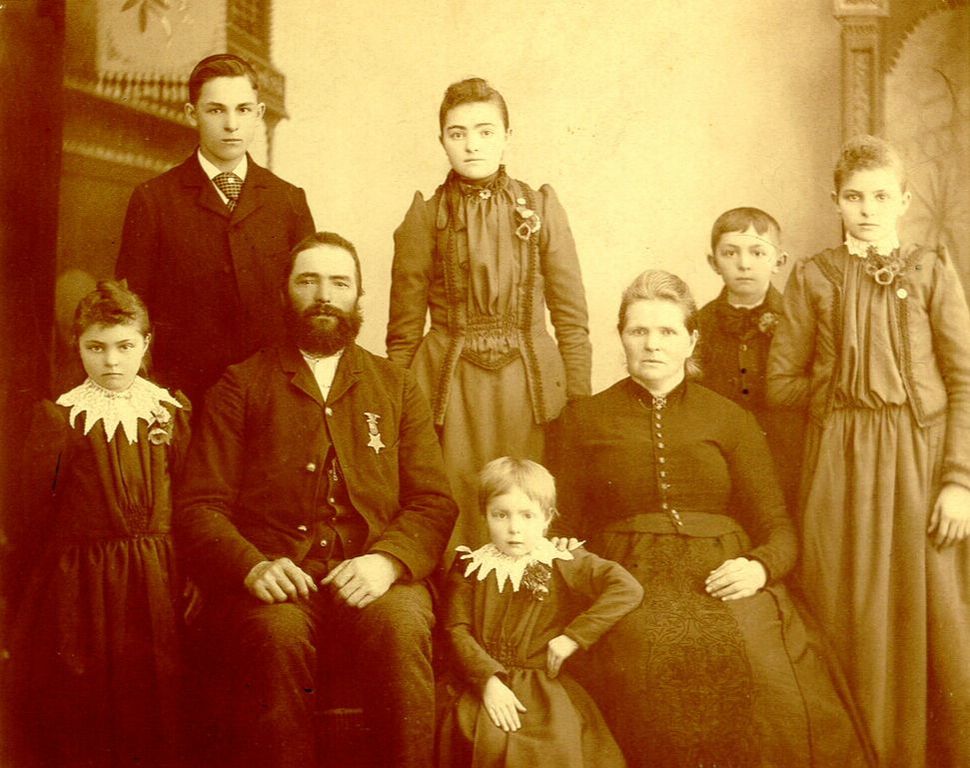 Civil War veteran Sebastian Buehler, his wife, Mary Obrecht, and six of their nine children.  The young boy on the right is Sebastian Valentine Buehler, Tom's great-grandfather.   The elder Sebastian Buehler is wearing the Grand Army of the Republic medallion. 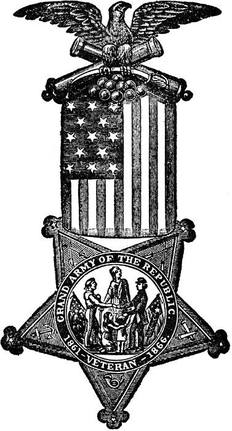